The store will not work correctly in the case when cookies are disabled.
Understanding the Clinical Significance of Immunoglobulin Tests

Many people tend to have perennial respiratory infections, eczema, or allergies that cannot be diagnosed with routine tests, such as lymphocyte subsets, immunoglobulin series, and white blood cells. Testing the levels of the five types of immunoglobulins is also necessary.

However, while many people undergo these tests under their doctor’s recommendations, most don’t understand what their clinical significance is.

We’ve dedicated this piece to unraveling exactly that by taking an in-depth look at immunoglobulins, one of the most critical components of the human body.

Immunoglobulins are glycoproteins that are produced by plasma cells in the blood. They account for about 20 percent of the total protein present in plasma. They refer to a class of globulin that displays antibody activity or one with chemical structures similar to antibodies. They are the main reaction substances of the immune system’s humoral response.

As one of the body’s primary disease resistance components, they fight off bacteria, viruses, strengthen the phagocytosis of cell functions, and kill pathogenic microorganisms.

These are the five isotypes of immunoglobulins present in humans: 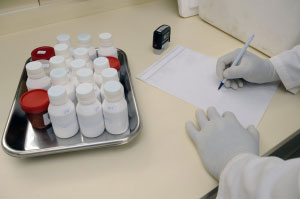 IgG is synthesized from plasma cells and is the only type of antibody that can pass through the placenta barrier. It can be synthesized three months after birth.

IgA, produced in both monomeric and dimeric forms, is primarily distributed in mucosal surfaces, nasal, bronchial, and digestive tract secretions, sweat, tears, colostrum, and saliva and in involved in the local anti-inflammatory immune response.  The dimeric form of IgA is the most prevalent and is also known as secretory IgA.

IgM, also known as macroglobulin, serves two roles:  first, in monomer form as the B cell receptor binding to antigens during the immune system’s primary response; and second, secreted as a pentamer into the bloodstream where the antibody binds to antigens. Due to the large size of the pentamer, the antibody was originally referred as γ-macroglobulin, and then in subsequent terminology as IgM—"M" for “macro.”